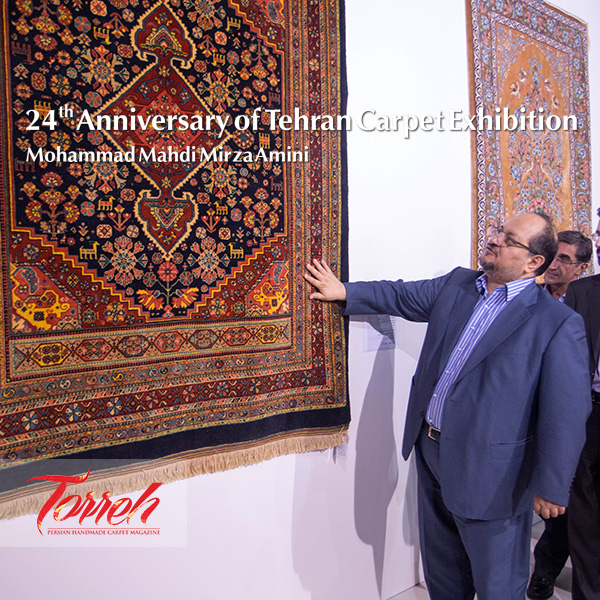 The 24th round of Tehran Carpet Exhibition which is a congregation of Persian handmade handicrafts was held on August 23-29, 2015.

The 24th round of Tehran Carpet Exhibition which is a congregation of Persian handmade handicrafts was held on August 23-29, 2015.
730 pavilions were set up in an area of over 30,000 m2 at this year’s expo which was solely devoted to carpets, as no other exhibitions were running at the time.
International carpet dealers and purchasers were registered through an online reception process this year. There was also a qualitative strategy to determine real purchasers which led to the selection and participation of 54 ones in the expo.
A hall was devoted to showcasing the process of carpet production for interested visitors. Also, a set of educational courses had been organized to familiarize interested learners with the ways of purchasing and maintaining carpets as well as incorporating them into modern lifestyle and decoration.
Other events happening concurrent with the exhibition were organizing the 5th edition of Top Carpet Festival and unveiling the Persian version of Iranian Carpet Online Encyclopedia (Wikifarsh).

An Opening Touched by Art
The opening ceremony of the 24th edition of Tehran Carpet Exhibition was attended by political figures including the president’s executive deputy as well as a number of outstanding figures from the world of art and culture.
Some of the fascinating programs of the event included showing the short film “A Letter to the President” and “Mosadegh’s Unknown Memento”, as well as speeches by Mohammad Reza Mirkarimi (cinema director and producer) and Ghotbedin Sadeghi (Theater director and playwright) that were all well-received by the audience.

A Meeting for Overseas Carpet Dealers
A special meeting was held for handmade carpet dealers with the presence of Mojtaba Khosrow Taj, deputy to the minister of industries, mines and commerce, which aimed at improving and developing the international trade of handmade carpet.
“The government is ready to not only eliminate the existing obstacles in export development but also handle things in the areas where the private sector is unable to interfere, the most important of which being ‘Persian Carpet’ advertisement in the world media,” Khosrow Taj noted.
The overseas dealers involved in Persian handmade carpet trade also discussed their views and concerns at the meeting.

Cooperation for Export
A joint meeting between Iran National Carpet Center (INCC) and Export Guarantee Fund of Iran (EGFI) was held with the presence of the mangers of the two sides and a number of Persian carpet exporters during the 24th Tehran Carpet Exhibition.
“Based on the agreement between the two centers, most of the risks of export and doing business with foreign traders will be reduced by issuing bank guarantee and insurance certificates,” head of EGFI said.
An educational workshop introducing the services and products of EGFI was also organized for Iranian carpet dealers on the sidelines of the event.

Organizing Educational Workshops
INCC also organized 10 different workshops for the common audience and visitors on the topic of ‘changing lifestyle through carpets’.
Some of the workshops that were well-received by the audience included “How to buy a good carpet?”, “Ways of keeping and maintaining carpets”, as well as the educational gatherings of “Carpets in modern space”, “Carpet furnishing in apartments”, and “Decorating houses with carpets.”

Paining Contest for Kids
A conspicuous event that took place at this edition of the expo was the organization of a painting workshop for children with the subject of carpets.
The workshop which was held with the cooperation of the Institute for the Intellectual Development of Children and Young Adults sought to familiarize the new generation with Persian carpet.
The participating children freely drew their favorite paintings with the subject of handmade carpet and the top ones were rewarded on the last day of the expo.

5th Festival of Top Carpets Held
The 5th edition of Top Carpets Festival was held concurrent with Tehran Carpet Exhibition.
The call for participating in the festival was made in July when over 730 pavilions were invited to present their top products. The carpets were classified into two groups of new and old that came in 8 and 4 sections respectively. The referees chose 183 carpets in 12 groups among which 61 ones were finally selected to be showcased at the festival.

Process of Carpet Production Shown
An attractive and educational part of the exhibition was devoted to an artistic-dramatic studio presenting the process of carpet production from spinning and designing to weaving and repairing carpets.
Handmade carpet activists are now awaiting the 25th round of the expo which is supposed to be held in August 2016.