Be surprised the relation these 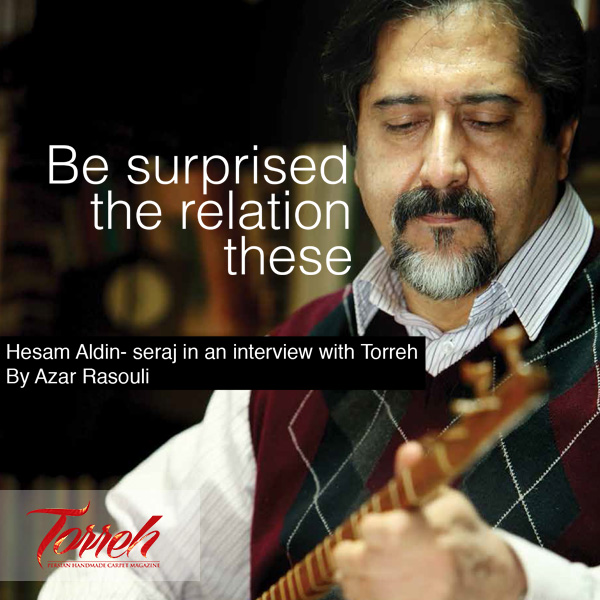 Hesam Aldin- seraj in an interview with Torreh | By Azar Rasouli | Was born in Isfahan in 1958, started playing "Tonbak "under surveillance of salient masters as ,Sirous saqari,Faramarz Payvar,Pasang Kamkar, Reza Shafiean when thirteen.

Hesam Aldin- seraj in an interview with Torreh
By Azar Rasouli

Was born in Isfahan in 1958, started playing “Tonbak “under surveillance of salient masters as ,Sirous saqari,Faramarz Payvar,Pasang Kamkar, Reza Shafiean when thirteen. Besides, received choir lessons with master Mohamad- reza Shajarian and
Mahmoud Karimi, what he believes have been inherited from his father as a gift in generations.
He has done some composition works for his own albums besides singing as well. After being recognized as an architecture, He has received his Ph.D. in art research field from Honar –university of Tehran.

Torreh – Persians traditional art works used to be relevant in forms and content, from long ago, do you think is there any of such relations between music and carpet as well?
We should go for it in two ways: first of all, we may analyze the carpet patterns and state that there are few similarities between them and musicals tones according to some standard indexes. In the other form, it might be possible to judge all by your sensations. There is a harmony among all what are being called artistic works such as music and miniature(the Persian traditional painting method) and those are understood by sense even thought I insist that can be proved by mathematical logic and principals too. Most of lines and motives are driven from melodies you feel when listening to sort of traditional music meanwhile looking at the mentioned patterns.
This gives you the joy of harmony and involvement.

There are three types of affiliated measurements to shed light on this topic in order to be clearly understood. According to math, whatever we do, always defined numbers when being added or multiplied, will lead us to the exact same given amount as has been declared and recorded before. This rule, is being obeyed unconsciously by carpet makers based on her experiences and trained sight.
In music, in what westerners call” major” in equivalency of our “Mahour”,we have the same amount of the notes as it is always as twice as its lower note to be called harmonic notes which is joyful to be listen to, anywhere.

Torreh- interesting to be mentioned ,as we know that this is exact rule for architecture and we are aware carpets are made for decorate and cover the rooms have been constructed according to those architectural works?!!
You may say it again! There are calculations to be done and be surprised realizing the relation between these arts….

Torreh – How architecture and carpet can be assessed as interactive art works with looking from musician’s window?
There is an unavoidable impact of architecture on carpet- making as defines the size and patterns which are properly matched to the frames and spaces…meanwhile, the music and carpet are interactively deal with each other and to me, when our child grows up in the rooms covered by such beautiful painting we put them under our feet, this patterns and artistic mood influences his temper and constructs child’s sight and creativity…
As I do remember the pattern of our carpets we had when I was a very young boy and I still enjoy looking at carpets with their bewitching colors and motives!

Torreh-is there any possible impact of folkloric music of Iranian ethnicity groups such as; Kurdish, Lori, Turkish etc…on the way a carpet maker raised with any of those cultural characteristics, do the carpet?
I believe so. To me the folk living in warmer areas up, show their tendency to use the cold colors as instance blue and ivory where the people dealing with mountainous climate prefer warm and sunny colors like red, instead…
Furthermore, has to be mentioned that social status and the way people feel it in different areas, has the influence on their music the most. The affiliation between grieved singing tones and carpet patterns of the same region can be studied as a prove of my comment such as Josheqaan;s particular doleful square shaped patterns which demonstrate the social classes have been experienced in this part of the country …

Torreh- in both music and architecture plus carpet making, you may find the artistic and commercialized approached .which one to you can be the proper view toward carpet the most?
It depends to the production methods. In mass- production system of mechanized waving, there is no artistically value, for none of producer or the consumer, but in terms of handmade carpet ,we should consider the artistic indexes and peace of art can be presented. Asking me, I will not go for looking at it merely in commoditizing point of view.