The warp and woof of music and carpet 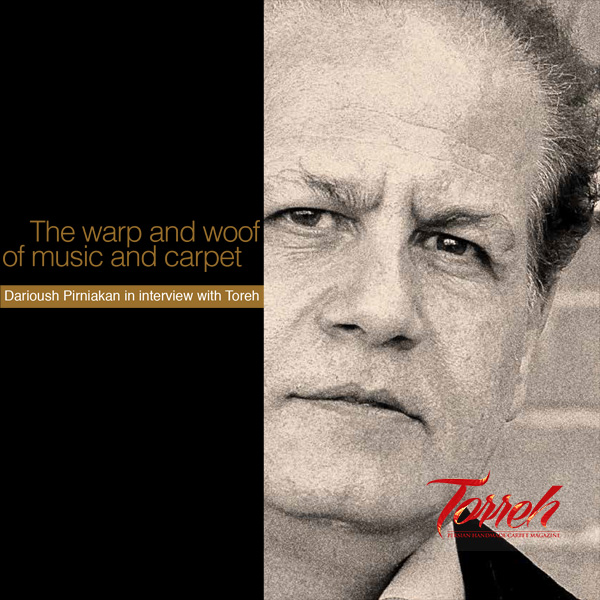 Darioush Pirniakan in interview with Torreh | He is about 60, and almost of his life has been companion with his musical instrument; Taar.

He is about 60, and almost of his life has been companion with his musical instrument; Taar.
His name reminds people of any artworks and albums in traditional Persian style music and to me, this name crosses into the mind with his master peace called; “Dar Sodaye Del’ playing Taar, cracking and picturesquely in a way you won’t never ever, forget!

He owns particular vision in regards to the two genuine Persian artworks (music and carpet making) according to his way of looking to the art philosophy which come s as follows:
Toreh-
How an art as a concept can be embedded into an artwork and makes us feel something could be distinguished as an artistic or non-artistic one? As instance, how it can be stated about handmade carpet?
Pirniakan-
art is rooted in sensation and folk’s emotions as a gift have been given to the glob’s soul and it is not important which kind of artistic work we are concerning about, but the demonstration of any part of that hidden gift ,somehow would be the point. Since a painting besides its beauty and glorious color orders may elaborates the profound meaning of a concept as well. This way, as if that peace of art is talking to the audience, the message is conveyed.
Above all, the real meaning of an art is freedom. The genuine art work is based on being free and out of defined frames, independent and never influenced by any obvious or hidden benefits of who want take advantage of art as a tool. To me any artwork according to abovementioned definition can be considered for its gentility. Besides, verity of interpretations, ideologies and genres, may be established on this agenda.
Hence, carpet which holds the freedom and original ideas in itself innately, can be defined as a genuine art.
Toreh-
Regarding to some principals concerning the art definition which claims an artist is someone who composes the music and not the one who plays the instrument about music, would you find it permissible saying that the real artist is the one who designs carpets and not the weaver of that?
Pirniakan-
Not at all. Pivotal part of playing methods is based on improvising, what comes instantly and coincidently and crosses in to the mind of the player which have never been planned or composed….
The same about carpet, many of motives just being emerged at the time of the weaving right from the wearer’s ideas and creating power. Even we have a title for it: mind weaving method! Isn’t it the creative artwork?
Please take Maestro Shahnaz as an example! During playing Taar, he is rising the standards of registered styles and creates astonishing improvisation obstructively comme il faut! Who can deny it as a magnum opus? Regarding the carpet, maybe remarkable in some westerner’s point of view but to us as easterners, there is no room for this categorization and segregations looking to arts…
I dare say, in Iran, any weaver is blowing her own soul into her carpet, it haven’t been seen, carpet artists who have been given the same plane to be worked on, would have handed the same result as the other ones do! Each person has her own way and delicate diversions of the motives. it can be said again about musicians who ever played the “ MAHOOR”, each one demonstrate the unique way of playing it so far throughout our music history!
To sum up, in the east side of this world, playing music and carpet weaving are both beyond what is called profession, but part of each artist’s soul, put into her or his work!
Toreh-
What you mentioned is known as the current soul of the art, which is called “alive tradition” or according to “Walter Benyamin: “alive legend”, what is your point of view?
Pirniakan-
I agree.in the east, the main art characteristic is being transferred for generation to generation. Each time, face to face training and experiences have been added or modified the texture of the mentioned art affiliated to the time of transformation. Let me make it more clarified with an example from Persian miniature. As you know, there is a Persian tradition style for painting people, which is not following the perspective principles. No one would be that idiot to even assume that in a country with bewitching art background over thousand years in carving and painting on stones and our heritages as “Persepolis” ,people were not aware of how utilizing distance and measurements as perspective shows in a painting.
So, question is why? It return to ideology and philosophy back stage of Persian way to looking at the globe. According to Persian mysticism people suppose not be considered different, superior and inferior even in the places they locate in real life! They are giving their mentality and blowing it to their work to speak louder than a simple image… it states we all are in the same level, form the common root and this matters the most not the social ranking or etc…
In carpet motives, is beautifully shown, the exile of the universe obliquely is being woven at the center n form of medallion which is surrounded by other shapes which remind us of globe, galaxy and solar system. Where ever there is no trace of registered design and motives, the next generation found the opportunity to modify and impact the weaving style compatible to their own time and sensations….
Toreh-
Is there any affiliation between geographical factors as key one, when analyzing Persian carpet’s elements meaningfully?

Pirniakan-
Undoubtedly, there is verity of style and methods for designing and making carpet in every corner of Iran as an emblem of the region which speaks of geographical impact on the craftsman who involve in this business. Every state and city has its own color order, designs and knotting methods which is famous and exclusively demonstrate a certain area. Lots of mentioned items directly driven from characteristic of the tribes, nomads and people who make them. But, noticeably, at the end, all of them may reach the unity in terms of collaterally defining the common soul of the universe.
Toreh-
How do you elaborate the future of this art?
Pirniakan-
I do feel three is mentionable decline of tendency for this art, among middle class in big cities, nonetheless, I’m aware this is still a live business in rural areas and villages, I am pretty hopeful we may find the newfangled ways in this domain to give this art wings to fly higher and more magnificent than ever….