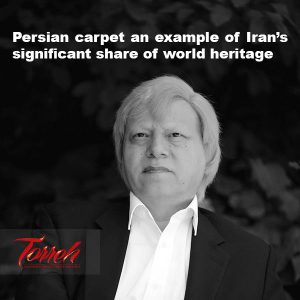 Head of the Research Institute of Cultural Heritage and Tourism Organization (RICHT) Seyed Mohammad Beheshti said carpets woven in Europe and other countries are indicative of the influence of the Iranian culture and cultural transactions with other nations, the RICHT website reported.

Head of the Research Institute of Cultural Heritage and Tourism Organization (RICHT) Seyed Mohammad Beheshti said carpets woven in Europe and other countries are indicative of the influence of the Iranian culture and cultural transactions with other nations, the RICHT website reported.
“The fact that today we are unaware of carpet-weaving in other countries is indicative of our cultural oblivion and our significant share not only in the field of carpet but in the world heritage.”

According to the RICHT Public Relations Office, Beheshti made the remarks at the first exhibition of “Western Europe and Indo-European carpets in Iran” which was held at Iran Carpet Museum.

He added, “Maybe nothing is more important than reminding the people of our country that who they are and what are their characteristics and the required instrument for this purpose is the same thing that has been developed by the people of this land throughout history and each are somehow manifestation of the cultural features of this homeland.”

Beheshti further remarked, “We can look at each of these manifestations as the mirrors in front of us wherein the cultural image of the people of this homeland is being reflected and if we intend to know characteristics of the people we should look at the remaining works.”

He pointed to the carpet as one of those works and raising the question that what cultural feature carpets elucidate, he said among the terrestrial features of carpet one is that it provides suitable, pleasant, warm, soft and comfortable flooring.

“But”, he noted, “there is a characteristic in the Iranian culture that is whatever it touches or applies it would not suffice to its terrestrial feature rather it should conquer the issue from earth to sky and this is not only exclusive to the carpet but to the pottery, dishes, food, architecture, etc. as alchemy is one of the characteristics of the people of this homeland, i.e. to transfer a worthless object into a precious thing.”

Stressing that the Iranian culture enjoys diversified features including alchemy, he said throughout this country these characteristics are visible and in some parts, some of them are more obvious.

Manifestation of Alchemy in Persian Carpet

Elsewhere in his remarks, Beheshti referred to the carpet as a scene where the Iranian alchemy has been manifested and said this is the point where both the earth and the sky can be conquered and carpet can be considered as pulling down the sky to earth or sending earth to the sky.

Stressing that carpet’s prestige is much higher than being expressed in words, he said but the one who has put the carpet beneath the feet of human beings has considered much more respect for man.

The head of the Research Institute of Cultural Heritage and Tourism stressed that many things can be recognized through carpets and said carpet is the manifestation of the Iranian culture and said carpets on display at the exhibition have been woven in Europe, India, etc. and the influence of Iran’s cultural transactions with other cultures can be found in them.

“Carpet weaving in Britain, France, etc. is a source of surprise for us which is indicative of the influence of our past in the culture of these countries and our cultural oblivion as it has not been true in the field of carpet but we have had a significant share in the world heritage.”