How does Iranian Handmade Carpet Benefit from Lausanne Declaration? 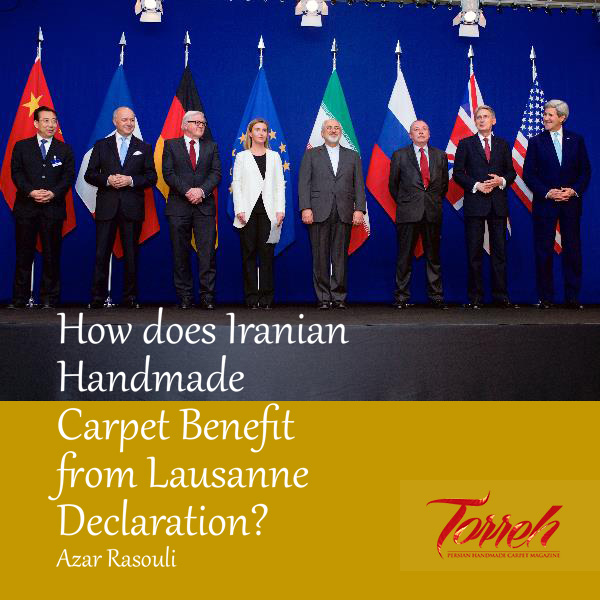 The Iranian New Year began with the hot debates going on in Lausanne, Switzerland, and Iran's economy was expecting, above anything else, some promising keys to unlock its business and commerce.

The Iranian New Year began with the hot debates going on in Lausanne, Switzerland, and Iran’s economy was expecting, above anything else, some promising keys to unlock its business and commerce.
The news was finally announced with Lausanne declaration which, although did not make any commitments for the parties, clarified Iran’s ultimate stance as to its agreement with 6 powerful countries of the world that are home to over 80% of the global economy.
The promise to lift the economic sanctions against Iran is a key word assuring a fundamental change in the country’s economy. Now all the economic sections including the carpet industry are investigating the influence of this upcoming change on their output. Artists involved in the carpet industry are likewise trying to benefit from such a transformation to improve their trade under the booming political and economic situation.
Among the most probable changes they expect the US resuming to import Iranian carpets, ease of foreign exchange transactions, and reduction in the price of some consumer goods, as well as transportation costs.
The following reviews by economic experts and activists about the prospective status of Iranian carpet export after lifting of sanctions will offer a better analysis of the new trend of Iranian carpet economy.

Referring to the prospective status of Iranian carpet export after the removal of sanctions, Hossein Raghfar, economist and lecturer at Al-Zahra University, says: “A bright future awaits Iranian carpets that are most popular among international purchasers and businessmen.”
“Unfortunately, political dealings with Iranian products particularly handmade carpets in American markets in the recent years terribly declined the trade of Iranian carpets which were sadly replaced by Indian and Turkish products that mostly copied Iranian patterns and were sold in the US in the name of Iranian carpets,” he goes on to say adding that it would therefore be hard to divert Iranian carpet market in the US in favor of its producers and exporters.
Emphasizing the international trade centers welcoming Iranian products following the lifting of sanctions, Mr. Raghfar reiterates: “With regard to the thriving growth of handicrafts industry in recent years, the removal of sanctions will provide us with a good opportunity to offer Iranian high-quality handicrafts to compete with the low-quality products of India and China.”
He further highlights the role of Iranian handmade carpets, as a blend of art and industry, in the country’s economy, adding: “Apart from influencing the domestic economy, Iranian carpet has been successful to attract international markets by the delicate feeling it transfers to the observer particularly in terms of its artistic aspects.”

Another Iranian economist, Farshad Momeni expresses his opinion on the subject as follows:
“If Lausanne declaration results in Iran’s ultimate agreement with P5+1 and in case the country is determined to seize the opportunity, lifting the sanctions can considerably develop the country’s potential capacity.”
Academic board member of Allameh Tabatabaee University further refers to the positive influence of lifting the sanctions on the country’s economy by eliminating bank sanction and hence reducing the cost of transactions by 30% for producers and exporters.
“Even if we had previously had the productive capacity to compete with foreign products in terms of quality, we would have been unable to win the contest due to the huge cost of bank transactions that the producers had to incur,” he goes on to say.
Pointing to the current limitations in the carpet export to the US, Mr. Momeni adds: “Although we hope for the removal of such limitations in handmade carpet export to American markets, the exporters would not be much successful in their efforts if the banking system is about to follow its previous policy.”
Criticizing the failure to internationally register Iranian patterns on the one hand, and the former government’s unkind attitude towards this art-industry on the other, he states: “Such shortcomings have caused our former competitors to somehow occupy our lofty status in handmade carpet industry and we are therefore required to find a reliable way out to regain this status.”
“At the time when Iranian handmade carpet exports to the US were not yet banned, we focused on the quantity instead of improving the quality, forgetting all about the reputation of our handmade carpets,” Mr. Momeni further says, noting that one solution would be learning from previous mistakes to make up for such failures and head for prospering in international markets.

Answering the question about the future status of Iranian carpet export after removing the sanctions, Albert Baghzian says: “One outcome of the sanctions for the country has been the difficult way of entering the target market and common investment. Air and sea transportation of many goods and industries was not possible and we therefore had to use ship-to-ship transfer which damaged a lot of exported goods.”
Economist and academic board member of the University of Tehran further states that such shortcomings would be removed following the lifting of sanctions, and the American and European markets would open doors to our carpets; moreover, ship transportation, as the most economical way of transferring, would be available for both producers and exporters.
“Another outcome would be reducing the insurance cost of ship-transferred exports as well as eliminating the exporters’ concerns to export their goods. These will all lead to a considerable reduction in the export expenses that would provide foreign customers with our carpets at a much lower price,” Mr. Baghzian continues.
“The longer the sanctions take, the more probable for the customers to forget this strategic product of ours; hence, international markets will be filled with low-price carpets from rival countries, leaving our carpet to wait a long time before it can re-enter the markets.”
Expressing hopes that the removal of sanctions would let Iranian carpets be exported to wider markets and flourish with a higher financial circulation just like North American markets, he notes: “We need another marketing campaign in order to offer Iranian carpet to American markets. If not required in the past years, more modern and scientific marketing is now called for especially with regard to the cheating competitors who export their carpets in the name of Iranian carpet.”