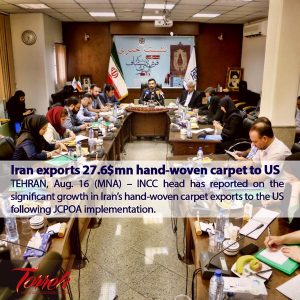 TEHRAN, Aug. 16 (MNA) – INCC head has reported on the significant growth in Iran’s hand-woven carpet exports to the US following JCPOA implementation.
Head of Iran National Carpet Center (INCC) Hamid Kargar said Iran’s exports of Persian carpets had declined from 80 million dollars before 2010 to nearly zero by the time the Joint Comprehensive Plan of Action (JCPOA) became operational.
Despite unfavorable export figures for the Iranian hand-woven carpet last year, a significant growth was perceived at the beginning of the new Iranian calendar year (began March 20) promising a better future for economic activist, noted the official.
The official underscored that in the first four months of the current year (spanning March 20 – July 21) more than 27 million dollars of hand-woven carpet were exported to target markets indicating a 39.5 percent soar in value as compared with the same period a year earlier.
Despite the fact that in the past few years, Iranian hand-woven carpets were not allowed to enter the US territory, implementation of the JCPOA and lifting of restrictions have allowed room for the launch of carpet exports to America as the world’s largest buyer of the product.