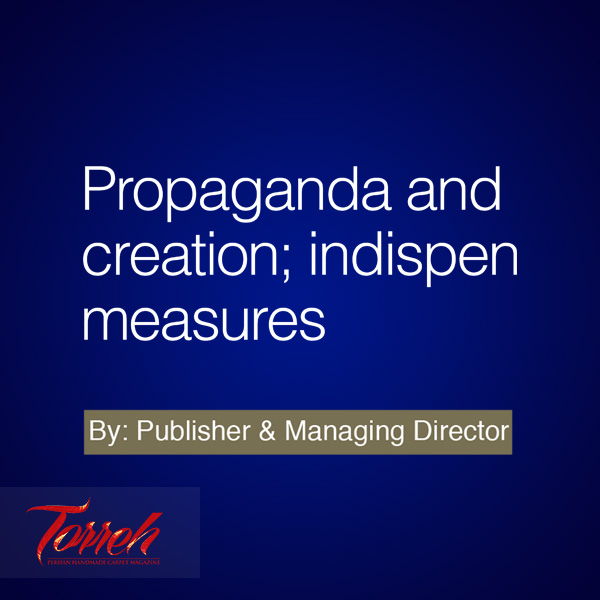 By: Editor in chief

How is the Iran National Carpet Center (INCC)? What have been the merits and services of such a center to Persian carpet with thousands of years of history? There are large number of Iranian carpet weavers and other artists; are they aware of such a center’s existence? Does private sector require such a center’s help at all?
I would like to refer to my quick flip of the very old documents on such an arty industry, talks with carpeting industry professionals and listening to their worries in order to address two indispensable problems. It will be a little harsh, but if they become true, they would take worthy position to nullify the initial questions of this editorial.
1- Propaganda:
Through the years, industry and commerce for carpeting sector have received massive funds on commercials to promote sales. A glimpse at the historical records reveals how pioneers have emphasized on the role of advertisement. Mr. Mozafar Firooz, then Iranian diplomat in Washington DC during first Pahlavi dynasty, counseled the Iranian authorities on the significance of promotion in better sales of Persian carpet. “Should Iranian government approximating many modern countries recognize the importance of propaganda and commercials for Persian goods in the USA and simply solve the official formalities for tariffs and promotion channels, the Persian carpet and other goods would enjoy an extraordinary share in the US markets.” Another example occurred in July 14th, 1936, when the board of directors in Iranian Carpet Co. agreed that “the company firmly believes in budgeting the Persian carpet abroad marketing; in addition, the company seeks Persian carpet excellence and preferences over other rival products. Therefore, the company considers it as urgent to allot half of the next 10 years’ revenues to the promotion of Persian carpet. If the expenses surpass the budget, the amount of 1.000.000.00 Iranian Rials would be considered as budget for the promotion. The investment would be settled with company’s revenues.”
We could be proud of our ancestors’ good will and thoughtful steps in promotion of Persian carpet. The wonderful Persian carpet is intertwined with the name of Iran. The world recognizes Iran for its quality carpets.

Today, such concerns still linger in marketing fields of carpeting industry. Public and mostly private advertizing agents are echoing same concerns and obligations to introduce Persian carpet to other nations.
In view of all the specialties and specifications of the Persian carpet, it still requires informative advertisement and promotion to maintain share in the global market. It would survive if ever happen to implement propaganda vehicles based on their level of effectiveness. However, propaganda is a time consuming and expensive task.
Although, all the producers have plans for better market share in their sales departments, the entire Persian carpeting industry in its artistic and cultural perspectives need to receive an exclusive governmental support.
The Iranian government must take a firm role in promotion of Persian carpet. This necessity makes difference to the role of Iranian National Carpet Center. Allocation of reasonable budget for domestic and international advertisement of the hand-made carpet in 2014 would mean as half the way is paved and the rest of it requires delicately mindful and appropriate expenditure of the budget for the sake of carpet marketing purposes.
2- Culture creation:
Handmade carpet is a piece of art and those who practice weaving carpet are artists. Recognition of such an idea by Iranian culture will take time but is very urgent. Having devaluated the position of carpet weavers in public opinion, common people would regard the whole industry as low paid and less prestigious job opportunities tailored for charity organizations. Such belittling attitudes towards an artistic product by the mass media, besides majority of weavers being recruited from the poor class of the society has downgraded the job in the list of vacancies available to the youth.
On the other hand, Persians truly measure handmade carpets but the expensive prices and difficulty in matching them with the modern decoration styles make it difficult for carpet lovers to afford. Such points of view should be modified through moderately diversified options of modern patterns, colors, size and prices.
Creating a kind of communication channel between the carpeting professionals and other artists, sociologists, psychologists, etc, requires revision of the public understanding of Persian handmade carpet and public recognition of carpet weavers. Which organization but the INCC can lead the general public opinion? I believe that, concentrating on these two factors, INCC can prove itself to the society. Then, there could be measures on how to treasure the other aspects of this rich industry.