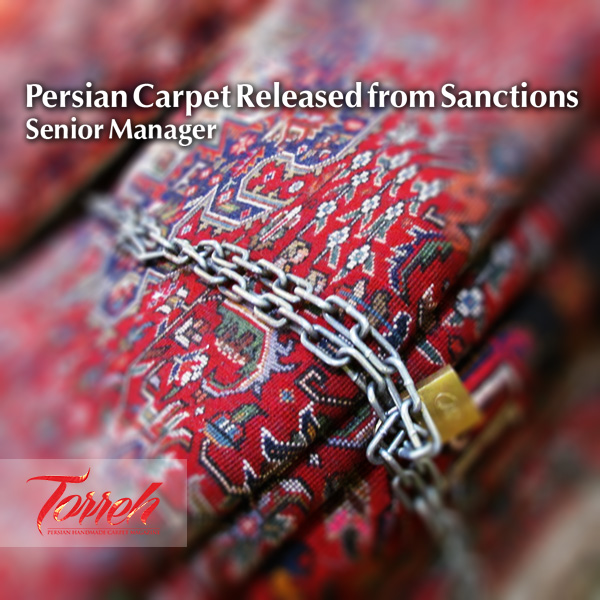 As one of the most important articles included in the final historical agreement between Iran and P5+1, the sanctions on the import of Persian carpet to the US were removed accordingly.

As one of the most important articles included in the final historical agreement between Iran and P5+1, the sanctions on the import of Persian carpet to the US were removed accordingly.
Issuing the permit to Persian carpet export to the US brought great joy not only to the public but also to the activists in the industry far and away.
A part of the article reads: “According to the agreement, that will be possible to export a number of goods including carpets, pistachio and caviar from Iran to the US. It should be noted that the export of such products which had become free in 2000 were banned again in 2010.”

Where did the sanctions come from?
The first signs as to imposing sanctions against the import of Persian carpet were revealed in summer 2010. The private sector and active exporters of Persian carpet to the US were more influenced by the news and embarked on following the case using their commercial expertise before the government took any steps.
In fact, the growing rate of Persian carpet export to the US in early 2010 was witness to the front-running activities of carpet exporters in the private sector who tried to stuff the US markets befor the imminent sanctions.
The story behind all this was that the US Congress wanted to cancel all the exemptions that included the import of some Iranian goods like handmade carpets at President Clinton’s time. On June 23, 2010, the US Congress finally removed Clinton’s exemptions for Persian carpets and pistachio in an act under the H.R.2194 Resolution.
The act was shortly signed by the then US president on July 1, 2010 according to which, the import of Persian carpet to the US was totally banned 90 days later.
This was actually another political game which took one democratic president to cancel the sanctions on Persian carpet import to the US, and another to reestablish the same sanctions.
The final approval of the act put an end to the import of Persian handmade carpets to the US from September 29, 2010.

The Market Lost
Persian carpet lost one of its greatest export markets upon the implementation of sanctions.
Although the statistics corresponding to Persian handmade carpet export to the US over the months prior to the sanctions were a bit exaggerating and Iranian carpet activists began to increasingly send carpets to the US at hearing about the imminent sanctions, the US had already been one of the main importers of Persian carpets.
It annually purchased around 200 million dollars of handmade carpets on average, 80 million dollars of which belonged to Iran.
The sanctions deprived the US citizens from the original and precious brands of Persian carpet.

Removal of Sanctions
And it was again the act of fate that the very president who enforced the sanctions against Persian carpet import was the one who later lifted them.
Hopes for the removal of sanctions were more promising in 2015 with the smart and active diplomacy taken by the Ministry of Foreign Affairs in the new Iranian government.
Every step of the foreign diplomacy to interact with world powers reinforced the hopes until finally in April 2015 when Lausanne Declaration was released.
Following the declaration and at the suggestion of Persian Carpet National Center, the minister of industries, mines and commerce wrote a letter to the foreign minister urging him to consider the removal of the related sanctions on carpets over their diplomatic negotiations to remove or ease the sanctions.
The exhausting marathon of Iran’s nuclear negotiations with the 6 world powers had a happy ending in Vienna leading to the delight of all Iranians in general and the carpet industry in particular as they received the permission to export Persian carpet to the US once more.
Speaking at the first meeting of the board of governors following his return from Vienna, Javad Zarif said that Iranian negotiators managed to debate with the American party over our non-nuclear demands during the final days, one of which was the removal of the sanctions against Persian carpet import to the US.
Torreh expresses hopes that the removal can boost Persian handmade carpet export and encourage Iranian merchants to smartly plan a decent entrance of the Persian carpet to the US through a meticulous study of the market as well as the current status of the competing countries.